What is Ocular Histoplasmosis?

Ocular histoplasmosis is most often caused by a fungus called Histoplasma capsulatum. This fungus is found in the soil of the central and eastern United States. If a person inhales this fungus, it can cause an infection in the lungs. The infection usually occurs in childhood or adolescence and may cause mild flu-like symptoms.

During the primary infection, the fungus enters the blood stream and travels to the other parts of the body where small areas of inflammation form. These areas of inflammation can also occur under the retina, where they are painless and go unnoticed. When the inflammation goes away, a scar is formed. Ten to thirty years later, these scar areas may permit blood vessels to grow abnormally under the retina. As the blood vessels grow into this area, they can ooze serous (clear) fluid and blood. If this occurs in the peripheral retina, the person would probably not notice any changes in vision. Unfortunately, most of the time this occurs near the macula where it can greatly affect central vision.

If left untreated, this leakage can cause permanent loss of central vision, but if detected early, laser eye surgery can often stop the leaking and preserve central vision. If this leaking has occurred into the macula, the person will notice distorted vision and objects may appear smaller with that eye.

After making the diagnosis of Ocular Histoplasmosis, it is necessary to pinpoint the location of leaking abnormal blood vessels by performing a test called a fluorescein angiogram. This test is done by injecting vegetable dye into an arm vein. From there, the dye circulates to the retina at the back of your eye, where photographs are taken with a special camera to study the retinal blood vessel supply and to determine if abnormal blood vessels are present.

If the laser treatment is successful, you can expect a significant decrease in distortion, but the vision may not improve a lot. The main goal of the laser is to

prevent a more severe loss of central vision that usually occurs if the leaking blood vessels continue to grow and bleed.

Even when laser treatment is successful, new leaking blood vessels can reappear at a later time, and further damage vision. Because of this, it is important to check the vision daily with an Amsler grid and report any changes immediately. Despite the possibility of central vision loss, the good news is that peripheral or side vision is almost always maintained, so mobility is not affected. In general, people do not go “blind” even in the most severe cases. There are also several newer treatments available, including photodynamic therapy, and several medications that can be injected into the eye to help make the abnormal blood vessels stop leaking. 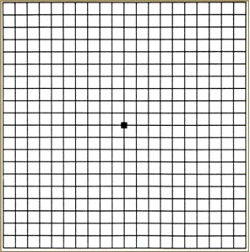 This may cause issues with us receiving your calls. Please contacts us online if this occurs. We apologize for the inconvenience.